skip to main | skip to sidebar

Dolly and Kent on Jay Leno 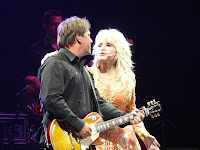 While traveling across the U.S. on the first leg of Dolly's world tour, the fourth show of the tour has landed Kent in Los Angeles where he will not only be playing a show at the famous Hollywood Bowl but also preforming tonight, July 22, with Dolly on the Jay Leno Show. Dolly will be singing her new single "Together You and I" and sitting down to chat with Jay for a few minutes. Be sure to tune in!!!
Posted by Kent Wells Productions at 9:18 AM No comments: Dolly Parton's 41st studio album, "Better Day", was released Tuesday, June 28 and is receiving great reviews. "Better Day", the follow up album to Dolly's 2008 release "Backwoods Barbie", contains a mixture of mainstream country, pop and bluegrass and features Emmylou Harris and Alison Krauss on the haunting and beautiful, Somebody's Missing You. The first single, Together You and I,has been getting great reviews and both the single and the album have received write ups in such publications at the LA Times and Entertainment Weekly, naming the album a "must have".

"Better Day" was produced by Kent at the Sound Kitchen and features Dolly's Mighty Fine Band and Singers!!
Posted by Kent Wells Productions at 1:06 PM No comments:

"Together You and I" debuts on Ellen Degeneres Show!!

"Together You and I", the first single from Dolly Parton's latest studio album, "Better Day", debuts tomorrow, May 27, on the Ellen Degeneres Show! The single has gotten great reviews and Kent reported very enthusiastic crowd response at the Ellen taping. Be sure to tune in to see Dolly, Kent and the rest of the Mighty Fine Band!
Posted by Kent Wells Productions at 10:12 AM No comments: 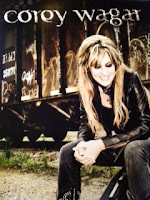 Corey Wagar and her songwriting partner, Gordon Brown, recently embarked on a nationwide radio tour promoting her new album "On the Edge" released on GTR Records. The two have been criss-crossing the U.S. doing radio interviews and reporting back incredible response from listeners. The album, co-written with several of Nashville's "hit makers", including two sides written with Kent, is being touted as a high energy celebration of Corey's "tough girl-independence". The album also features Corey's soft side with heartwarming ballads and her first single, Hurricane, was recently described as having "all the bang of Jason Aldean's country-rock anthems". Way to go, Girl!!

Corey recently made a stop in Nashville to catch her breath and catch up with friends. She's back on the road now and is getting more and more spins added as she makes her way up the charts.

If you'd like to know more about Corey and hear some of her music, check her out at coreywagar.com. You'll be glad you did!
Posted by Kent Wells Productions at 1:48 PM No comments: 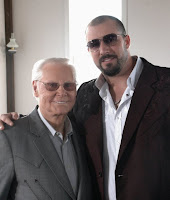 KWP artist Eric Lee Beddingfield is EVERYWHERE lately! With his latest album release, This Life Ain't For Everybody, his debut single from the album, The Gospel According to Jones, is climbing the Music Row Charts. The song, which currently sits at #23 on the charts, penned by ELB, Randy Houser and Adam Fears, was written about ELB's idol and country superstar, George Jones, who also sang on the single. The video for "The Gospel According to Jones", was recently shot in and around the Nashville area and is in the final stages of editing. The video contains several scenes of Eric and George, who graciously agreed to a cameo appearance. What a dream come true!! 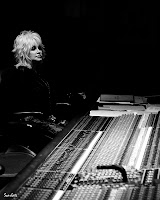 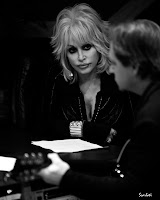 Hello everybody, we are blogging again and anxious to tell you about all that we are doing at Kent Wells Productions! We've had a busy fall and winter, and spring 2011 is turning out to be just as exciting and full of great music.

Kent has recently been working with the one and only, Dolly Parton! Dolly has been in the studio with Kent creating her 43rd studio album, Better Day, which Kent produced and recorded at the Sound Kitchen. Better Day is an album of all new material and even features a duet with Kent. Dolly describes Better Day as "very uplifting and positive, as well as inspirational." The first single, "Together You and I" will premier on the Ellen Degeneres Show May 26th, arriving simultaneously with radio.

Better Day is the follow up to Dolly's critically acclaimed and successful Backwoods Barbie album, also produced by Kent at the Sound Kitchen, in 2008.
Posted by Kent Wells Productions at 7:31 AM 1 comment: 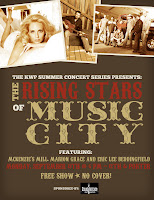 We are excited to announce another great night of music as the KWP Summer Concert Series continues on September 13. Once again the show will be at 12th and Porter with a 6:00 start. Please come out and enjoy three extraordinary artists--Eric Lee Beddingfield, Marion Grace and McKenzie's Mill. And, as always, it's a free show!
Posted by Kent Wells Productions at 9:14 AM No comments: